“You wet your trousers Princess…”

Now Princess was begging me to caress her breasts and stroke the whole of her body mercilessly. Madly. Wildly. Like no man had done before. And, who among men would dare look down on her request? After all I was like any other man and so I wasnt an exceptional. I had to respond to her call for duty.

I quickly unbuttoned her top and spread it out to the both sides of her arms so that the front part of her body would be easily accessible and ready for me to caress freely. Her body was one of those kinds that I had ever watched in the soap operas. I mean she was perfect. Her shape; wasp-waist and sexy broadened hips, her grown ass and pointed boobs. Not enough words can describe them all. She was such a cutie.

So after I was done with unbuttoning her top, I lay my hands on her breasts and started working on them. I touched them several times with her bra on. I touched and touched her breasts until at last we decided ‘no bra no more’. Princess feelings had shot up to uncontrollable levels. She was so hot that she almost tore her bra as she was struggling to take it off for me to hold her wholly. I took control of the situation. I had learnt that Princess was that kind of a lady who would easily give in to her emotions. She was at this point willing to do everything with me. Remember we were in her car and so allowing her to take off her bra would expose us to several risks. We would end up doing it right there which would of course sound weird afterwards.

I got hold of her hands and placed them around my waist.
“Princess, you dont need to open your bra for me please, I think I can do that by myself.” I tried to sound sweet.
I then penetrated my hands through the open ends of her bra and there I was. I finally reached for her plain breasts. Unclothed.
I touched those breasts again and again, mercilessly, like it was the last time on earth I was touching her. I stretched my hand further and reached out for her pointed nipples. They were so erect and I would feel it.  They even arouse a feeling that had existed in me like a hundred times high. I would feel myself ‘rising’.

I let my hands play on her nipples for a couple of minutes until I noticed Princess would not make any movements any more. Her breathing rate had gone so high that I would feel her heart beat very strongly on her left breast as I continued to caress her. She couldnt even say a word. The last action she managed was pulling me very strongly to her and spreading out her legs to the ends of the car. I knew what this meant but, would I go ahead and do it? I was blazing hot yeah, the intense feeling had also possessed me yeah but, could it be wise if we did it? Of course that wouldnt sound wise. It was not the best thing we would do. I promised myself never to screw her while in the car. Wed rather go to her place then. Wed better go to her place and there we would do anything. 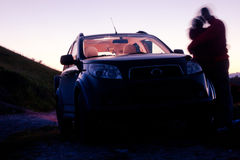 Princess demand was so high. She wanted to be eaten as raw as she was. Right there in the car.
I played my game wisely and ended all on her lips. I kissed her lips again and again until she was all done.
I pulled back and there she lay. On the car seats with legs wide spread.
She had wet her trousers and i would see it.
“Princess, you wet your trousers.” I said pretending to be shocked.
“You too wet yours Hymn.” She said this amidist smiles. I hadn’t noticed I had wet my trousers. I couldnt even recall myself getting to the climax.

“I now have to leave Princess.” I said as I reached out for my college bag.
“You dont have to ride in those dirty psv’s Hymn. I can drop you at your place.”
I totally had no problem with that.

Now before we set off, Princess did an unheard of thing. She…

Stories beyond ourselves |the campus magazine

Based on a true/valid story.